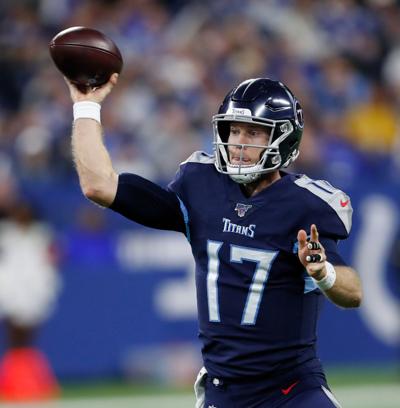 Editor’s note: I couldn’t be more grateful to have worked with Seth over the last couple of years, and I hope you all have enjoyed his columns as much as we have.

I guess it seems fitting that my less-than-impressive fantasy team’s, “The In-Between,” miraculous run in my high-stakes-money league, comes to an end the same week as my time at IUP as an undergraduate does.

Not to be taken as cliche, but I think the ‘90s pop-rock band Semisonic said it best in their hit “Closing Time” that “every new beginning comes from some other beginning’s end.”

What I take from that, and I hope that you can relate, is that even though one journey (my undergraduate at IUP) is ending, a new journey (the beginning of my professional career) begins Saturday following commencement.

The same can be said for my fantasy team. Even though my team wasn’t great this season, I learned so much more about this adult game of Dungeons & Dragons that we play.

So much that by the time next pre-season rolls around, I feel confident that I will be able to provide even more sound fantasy advice to my readers and listeners.

And while even six months ago, just before I began “The In-Between” the uncertainty following Dec. 14 kept me up unsettled late into the night – I’m ready now.

What began as a complete whim, my time at IUP has brought me an education, un-matched professional experience and countless memories that I’ll cherish forever.

Thank you to everyone who has helped me along the way. And congratulations to all those who will begin the next chapter along with me on Saturday.

To those of you who still have time remaining here at IUP, enjoy it, as it will be over before you know it.

And to all of you who still have fantasy teams deep in playoff contention, I’ll leave you once again with the famous words of my Uncle Greg.

“Stick to the game plan.”

Now let’s get to it, before your brothers or your sisters come.

Ryan Tannehill (Tennessee):  What Ryan Tannehill has done this season is completely uncanny and may have rejuvenated his career. Since becoming the Titans’ starter in Week 7, he is QB2 on a points-per-game basis.

Now, he gets the Texans, who are getting completely juiced by quarterbacks since losing J.J. Watt. Last week, they allowed rookie QB Drew Lock, in his second career start be a QB1 on the week.

The Texans allow more than  24 points per games to opposing quarterbacks, and if you have one of the hottest right now in the game, despite the name, it’s a no-brainer to start Tannehill as the Titans look to make a playoff run.

Aaron Rodgers (Green Bay):  Most likely, if you started Aaron Rodgers last week you’re probably out of the fantasy playoffs as he posted an anemic 11.4 fantasy points in a matchup against the putrid, 3–10 Redskins.

Frankly, it’s hard to trust him this week again against a hungry Bears team, who are the fifth-best against opposing quarterbacks and seem to have Rodgers’ number as of late.

I’ve even heard of fantasy managers sabotage dropping Rodgers this week in hopes of their opponent picking him up and playing him.

Ballsy? Yes. But I could very well see it work out in their favor.

Running Back I’d Start This Week:

Kareem Hunt (Cleveland):  Even though it seems to have somewhat hurt the fantasy value of Nick Chubb, RB on the season, Hunt has scored double digits in every game since being activated by the Browns in Week 10.

And it’s not just him scoring points that you should like, but it’s the way he’s doing it – averaging 4.4 receptions in addition to receiving an average of nearly seven carries per game.

This week he’ll face the Arizona Cardinals, who play perfectly into Hunt’s strengths – allowing 5.5 running backs receptions per game and more than four yards per carry.

Running Back I’d Sit This Week:

With Raheem Mostert coming on as the team’s lead back lately, more than 100 scrimmage yards and 23 fantasy points in the last two games, I don’t see the appeal of playing Coleman so late in the season against a middle-of-the-road Falcons’ run defense.

Darius Slayton (New York Giants):  Who needs Odell Beckham Jr. (OBJ) in New York when you can just have the rookie and rising star Darius Slayton?

Slayton, who is WR17 since being activated in Week 3, has been nothing short of amazing. On a bad Giants squad, he’s recorded seven touchdowns. That’s more than big-name players like Tyler Boyd, Robert Woods and OBJ combined.

This week he plays Miami. They’ve allowed the second-most fantasy points this season and were just roasted by fellow big-play receiver Robby Anderson for 7-116-1.

Give Slayton the respect he deserves and start him here in Week 15.

Stefon Diggs (Minnesota):  While Diggs hasn’t been consistent this season, posting double digits in less than 50 percent of his matchups in 2019, this benching is more about matchup than anything.

His Week 15 opponent, the Los Angeles Chargers, have been pretty good this season against the pass, limiting opposing receivers to fewer than 125 yards per game.

If Adam Thielen is out again, Diggs could draw coverage from shut-down corner Casey Hayward, which should limit the wideout’s frequently high ceiling.

Husker Extra Podcast: Ep. 141: Sorting through the bin of concerns for Husker hoops and football

The Crimson Conversion on TPSN: The Return of Jeff! (S3 E12)

Welcome back, Jeff! To celebrate his return, the guys talk about IUP WBB and their historic streak as well as potential playoff scenarios.