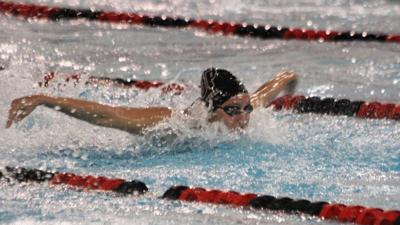 The IUP swim team’s roster has begun to look like a Mikesell family reunion over the last few years.

While the team has had siblings in the past, according to head coach Chris Villa, even having sisters on the team in his first season, the Mikesell family is poised to become the first to have three children on the same roster in the same season once Luke, the youngest of the family, officially starts his tenure at IUP in 2020–21.

Despite each sibling, the children of IUP alumni Jon and Sue Mikesell, being born two years apart, the trio will have one year of eligibility to swim on the same team thanks to Claire’s decision to redshirt during this season – though Luke coming to IUP wasn’t the biggest factor in that decision.

“I was going to be here another year regardless of whether I was going to swim or not,” Claire said. Luke’s decision to attend IUP “definitely made [the decision] a lot more special,” however.

Assuming Luke follows through on his commitment, he’ll actually be the first of his siblings to have his first and only commitment be to swim for the Crimson Hawks. Claire spent her first two seasons at Ohio University before transferring to IUP, and Paige’s initial plan was to swim elsewhere before flipping to the Crimson Hawks.

The family hails from Clearfield, Pa., roughly 50 miles from Indiana, so all three siblings had competed in swim meets both in high school and with their YMCA program and had been around the program during their recruitment.

“I had actually committed elsewhere first, but changed my mind,” Paige said. “My sister was already coming here, and I had been with Claire in high school, and I’d been around this atmosphere.”

“I really liked [IUP], but at the time, I wanted to be a little further away from home,” Claire said of her initial decision to attend Ohio. “I decided to transfer mainly because my coach there had her contract run out and their athletic department decided not to renew it.”

The familiarity of IUP and its coaching staff led by Villa helped with that decision process as well.

“Nowhere else offered what I wanted, and getting to be close to my family sealed the deal, and I never looked back,” Claire said.

The Mikesell children began to swim as children for a unique reason that really didn’t have any ties to athletics.

“We got involved with swimming because we’re very close to the Susquehanna River,” Jon said, “and the No. 1 killer is drowning.

“We kind of did it so our kids would know how to swim and not be a statistic, so we took them to the community pool (and) got involved with their swim program.”

The parents never realized just how impressive their children were at swimming until much later, when Claire started putting up good times in events and Paige was right on her heels.

During that time, Paige oftentimes played “second fiddle” to Claire, in the words of their father, which “made her a stronger competitor,” Jon said.

“She’s the hardest worker of the group,” Sue said.

Things always came much more natural to Luke, however, who had the advantage of starting at a younger age than his older sisters.

“He’s way faster than I am,” Paige said. “I like to swim with him and get better [learning] from him.”

Luke’s decision to come to IUP came partially from learning from Claire’s experience in Division I.

“I’ve always kind of wanted to stay away from a Division I school, and before she went there, I never really saw myself at a DI school,” Luke said.

“As Luke was growing up, he was beating kids two age groups ahead of him,” Jon said, and Luke’s success has led to a pair of state titles heading into his senior season.

While he likely would have the talent to make it at a DI school, Luke “wanted to stay somewhere smaller,” and IUP’s top-line criminology program ended up being the difference in getting the youngest Mikesell on-board with being a Crimson Hawk.

“Our high school coach’s brother was involved with the FBI and Secret Service, and he really got me into that,” Luke said. “He said he went to IUP for criminal justice and criminology, so I talked to him and he kind of persuaded me into coming here.”

“We always knew that they would be a special group and have the ability to excel at this level and beyond this level,” Villa said, “so it’s been exciting from that point forward to think that we had a chance at getting all three.”

“Our expectation was just to give it your best,” Jon said.

While Claire and Paige have had the benefit of two years spent together at IUP, each of the three siblings are excited to have everyone on the same team.

“I have a connection with my brother and sister in different ways, so I think it’ll be nice to have them both on the team,” Paige said.

“It will be nice because they’re my sisters, and I obviously want to spend time with them,” Luke said.

While there’s no real sibling rivalry between the three, it’s easy to tell how competitive they each are, but also how proud they are of each other’s accomplishments.

“We don’t compare ourselves to each other, we don’t attack each other about anything, we just support each other,” Luke said.

“Me and my sister swam in completely different events except the 100 freestyle,” Paige said, “but I’m a little faster than her, and my brother is just way too fast to even have a rivalry.”

“Even if there were a case of sibling rivalry, having that mutual respect for each other and with your teammates [is important to] be the best they can be together,” Villa said.

Although, the oldest sister does take some credit for her younger siblings’ success over the years.

“Paige and Luke are so good because I made them that way,” Claire said with a laugh. “If there’s anyone who could beat me, I’m glad it would be them.”

“They’re more supportive of each other than ever,” Jon said.

It’s safe to say that everyone involved is ready to get things rolling, not only to continue their success this year but to expand on it next season.

“They improve our team as a whole,” Villa said. “We think as a team we’re going to be very tough this year and next year with all three Mikesells.”

“Having all three of us here is going to be really, really cool,” Claire said. “Being my final year of swimming, having the whole family here is going out on a high note.”

Meet the Mikesells: A Family of Swimmers (Official Short Documentary)

When Luke Mikesell joins his older sisters Claire and Paige on the IUP swimming team in the fall of 2020, the Mikesells will aim to become the…