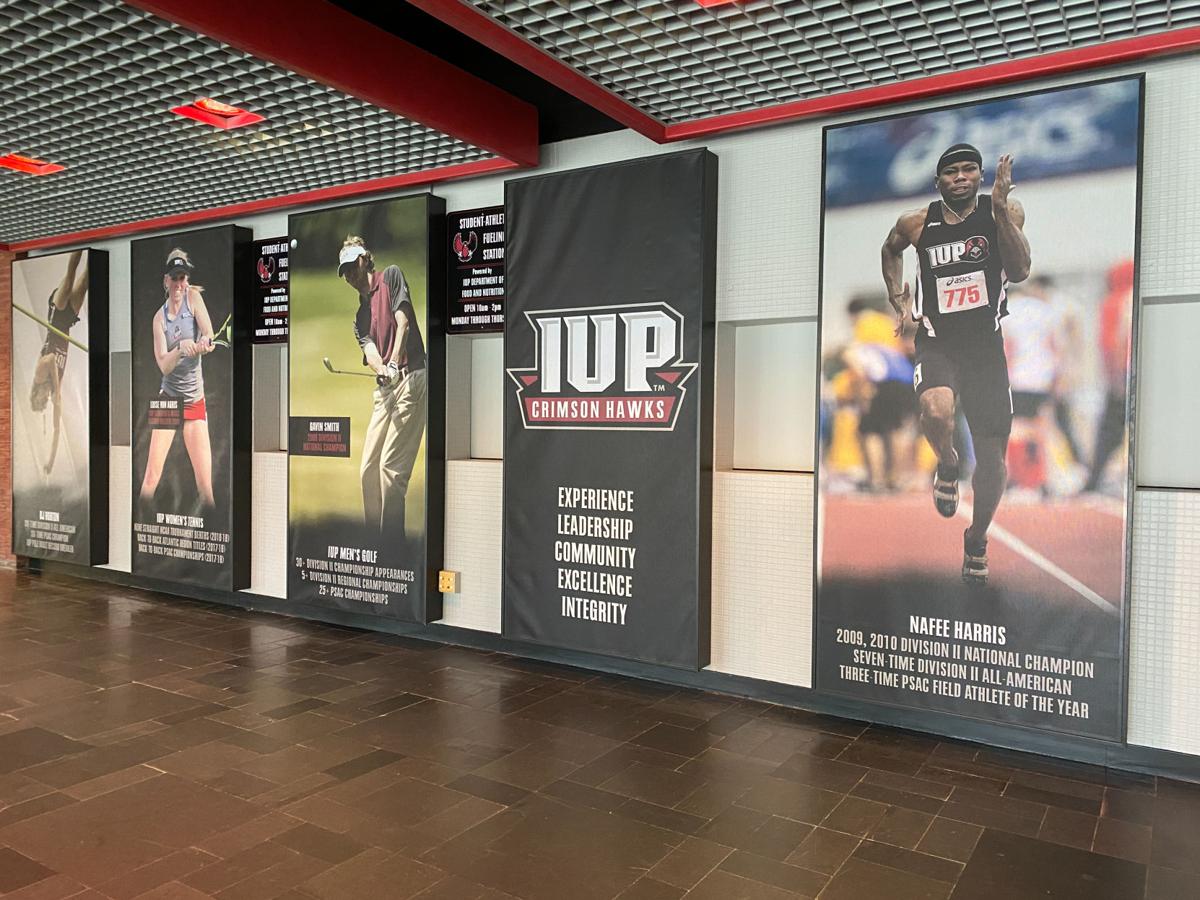 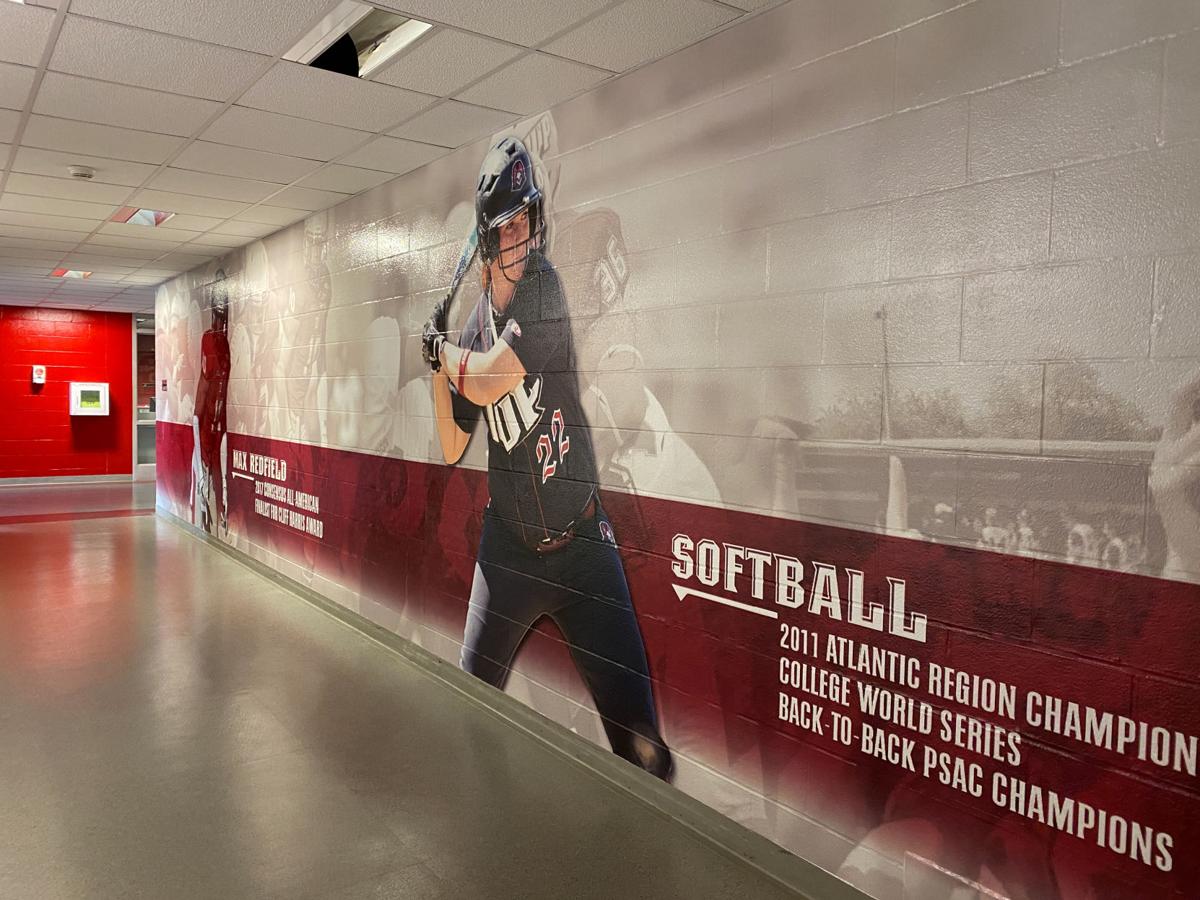 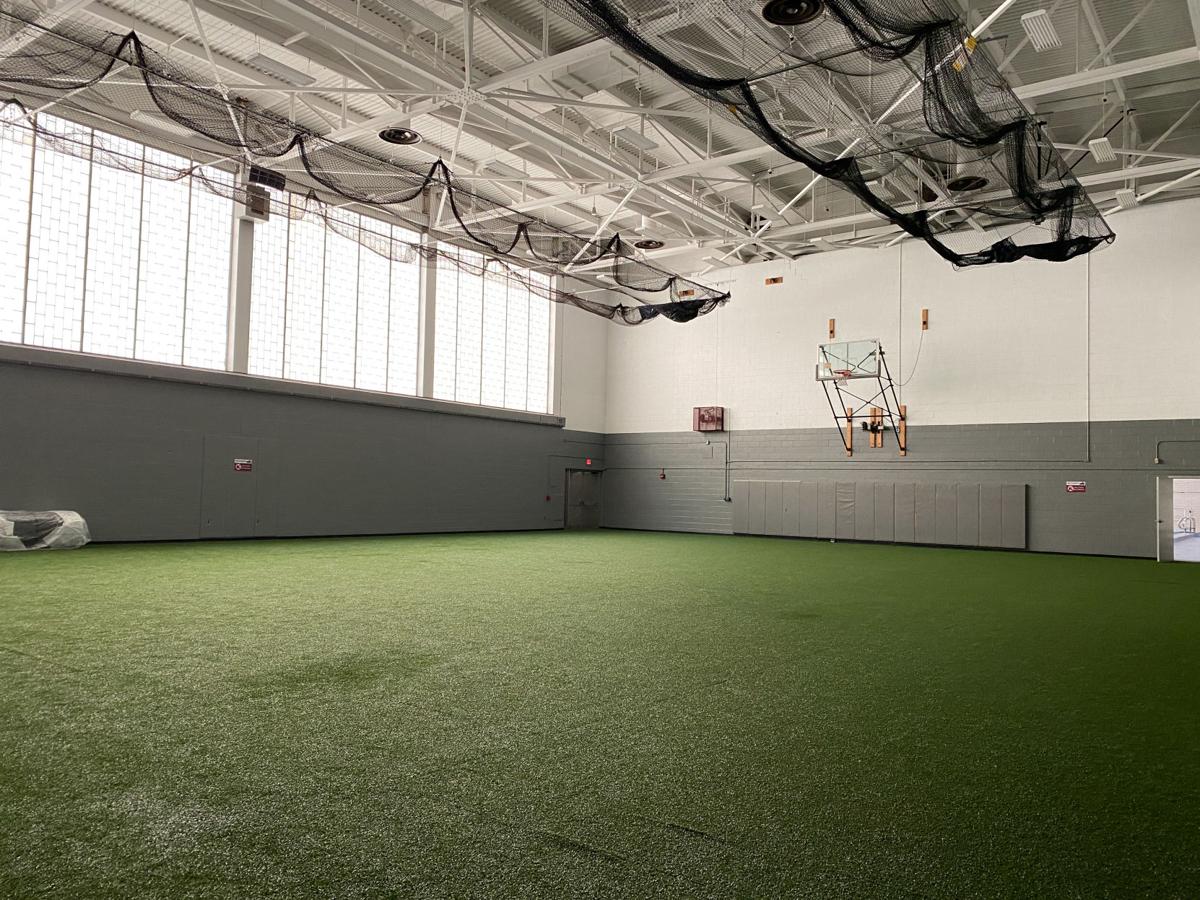 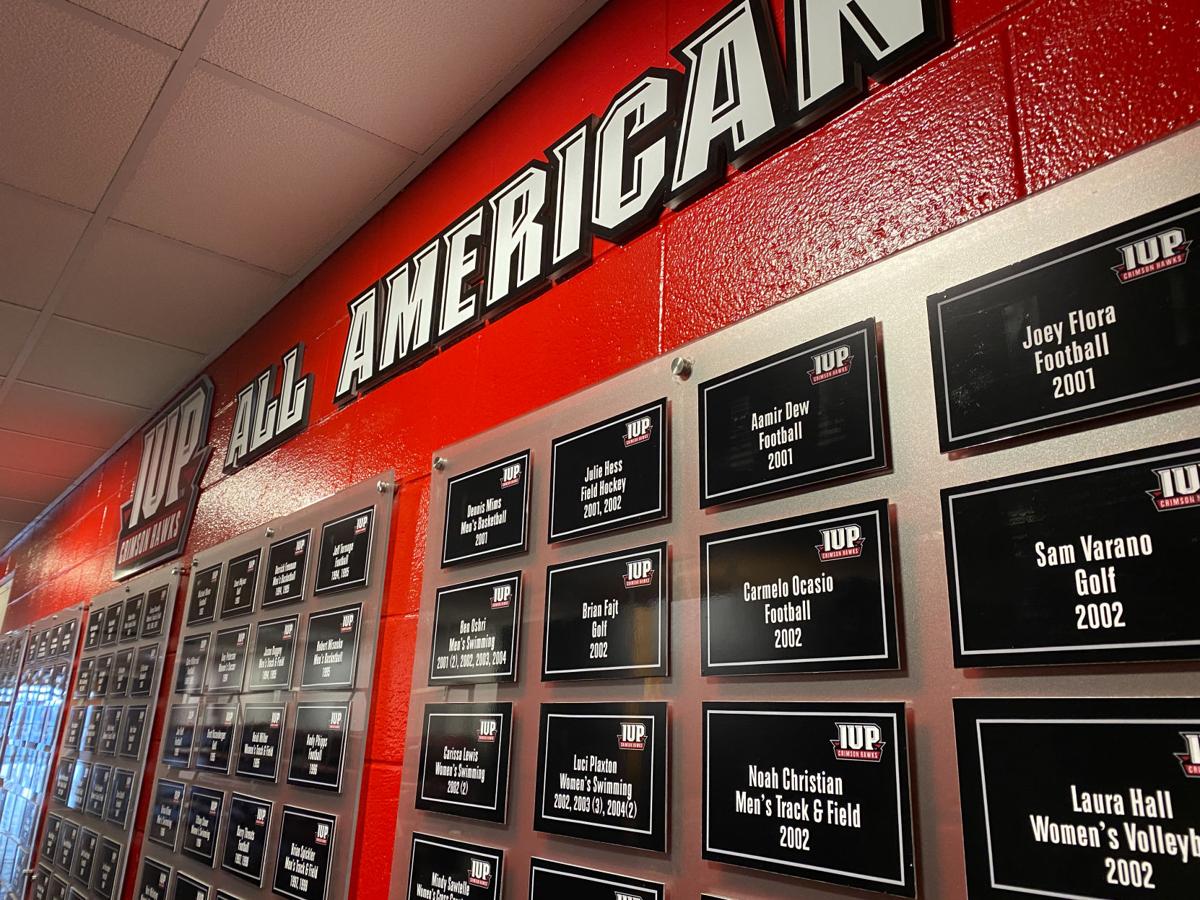 The Memorial Field House has gotten a major facelift this fall.

From artificial turf to shiny new plaques to granola bars, the enhancements have come fast and many since Todd Garzarelli’s first day as athletic director in late May. And it hasn’t gone unnoticed.

The enhancements have impressed athletes and coaches alike, and even a few alumni who have seen them. The consensus is that the IUP athletic department is better for it.

“I’ve been here since the spring of 2015, so I’ve been in that field house a lot of times over the past four, five years,” said Dylan Ruefle, a four-year runner on the cross country team and the outgoing president of the Student Athlete Advisory Committee who will graduate today.

“I told this to Todd, too, after he made a lot of these changes that one of my biggest pet peeves, almost, was how unattractive the field house was for the entire duration of my athletic career. It’s a pretty old building, and inside it’s just so dull, at least a few years ago it was or even a few months ago. I was always a huge advocate of trying to make changes for it.”

BEFORE THE Kovalchick Convention and Athletic Complex (KCAC) opened in 2011, the Memorial Field House was the full-time home of IUP’s athletic teams, all 19 of them. All the teams’ offices were housed in the field house, and it was where the basketball and volleyball teams played their home matches.

Since 2011, five teams have moved their offices to the KCAC and it has become the full-time home of the basketball and volleyball teams. These days, the Memorial Field House is used less than ever for IUP’s athletic competitions, and when the Crimson Hawks play there, they mostly do so out of necessity due to scheduling conflicts with the KCAC.

That’s not to say the field house has been abandoned. Not by a long shot. It’s the home of John A. Pidgeon Natatorium, where the swimming teams compete. Fourteen teams’ offices remain in the field house. And several teams still use the weight room and hold practices there, especially during the winter months.

Although structurally sound, the field house’s bare hallways and corridors left a lot to be desired prior to Garzarelli’s arrival.

“I was in Slippery Rock’s field house two years ago, and I was blown away by this photo gallery they had,” Ruefle said. “And I was always trying to pitch the idea to our school that we need to be putting up more photos and more aesthetics. I was even saying it would have a huge recruiting benefit to it.”

“Obviously, we have a great facility in the KCAC, which is one of the best facilities in all of Division II,” Garzarelli said. “But the Memorial Field House was a facility we needed to update to put our student-athletes in the best possible position to succeed on and off the field.”

“Strategically, we continue to build a firstclass experience for our student-athletes and a fueling station was at the top of the list,” Garzarelli said when the fueling station opened in August.

“The dawn of a fueling station for IUP student-athletes could not come at a better time,” IUP Sports Nutrition faculty coordinator Nicole Dann said at the time of the opening. “More and more NCAA Division II and III institutions are starting up sports nutrition fueling programs, such as fueling stations or fueling zones, while many Division I schools already offer these services. For an already competitive program like IUP athletics, the start of a fueling station is the icing on the cake.”

Open Mondays through Thursdays, from 10 a.m. to 3 p.m., the fueling station is located in the lobby of the Memorial Field House and has taken the place of the ticket booths.

“Student-athletes can choose between items such as chocolate milk, apple, and assorted granola bars,” according to the IUP athletics press release in August, and from what Ruefle has seen, it’s been a greatly useful benefit for his peers.

“In my own experience, there definitely were times where maybe I was hungry going to practice,” Ruefle said. “One of the best things I like about the fueling station is that I can save these snacks for after practice. I haven’t been on a meal plan for the past several years, and so I would always go to practice, shower and change and go home, and I’d have to make dinner. And depending on what dinner I was making, it would be a few hours after I’ve practiced until I eat.

“For athletes, the most optimal time to intake food and nutrition is within 30 minutes after you practice, so I’ve been able to get chocolate milk or pretzels or a granola bar and just put it in my backpack and I can eat that immediately after I finish practicing. I think that’s saved me a lot.”

“Between their classes, competitions and practice, and community service, our student-athletes sometimes don’t get a chance to get to the dining hall,” Garzarelli said. “The fueling station allows them to stay fueled during the day.”

SOME OF THE enhancements in the Memorial Field House serve practical purposes, like the fueling station or the turf in the auxiliary gym on the ground level, which is beneficial to many of IUP’s 19 varsity teams.

“The space was reimagined with an indoor turf playing surface laid down to replace the old rubberized flooring. The facility measures 35 yards long by 25 yards wide with 12-foot high usable wall space. The nearly 7,900 square feet of turf will be utilized by IUP’s indoor and outdoor sports for practices and training sessions,” according to the IUP athletic department’s press release in October.

“The auxiliary gym is an area that multiple sports can use,” Garzarelli said. “From a strength and speed standpoint, it’ll allow them to get better.”

Others were simply measures to make the Field House more aesthetically pleasing and inviting while honoring IUP’s rich past, such as the wall wraps in the hallways which showcase some of the best athletes in IUP history.

OTHER UPGRADES to the Memorial Field House include:

• A comprehensive All-American wall that showcases all of IUP’s All-Americans in all sports.

• The football wall of champions, which lists all of IUP football’s numerous successes, such as PSAC titles and appearances in the NCAA Division II playoffs. IUP’s 19 postseason appearance rank as the second-most in Division II football history.

• IUP in the NFL wall, which includes all former IUP football alumni who have played in the NFL or served in any other capacity, whether as coaches or in high-level front office positions.

• Graphic packages that enhance the field house while highlighting successes within the current sports housed in the field house, such as national champions and multiple national qualifiers and All-Americans.

“THE FIRST TIME I walked into that field house was back in 2010,” said Brenna Gallagher, the current women’s lacrosse coach and a 2014 graduate of IUP who played lacrosse for four years. “From 2010 to now with the amount of things that have been done have been, it looks way better. I definitely think that when you walk through the halls, you see all these old athletes and alumni, and it’s something to talk about with recruits.”

It doesn’t stop there. Alumni of the athletic department who have made it back to campus and seen the improvements are also raving about them.

“On homecoming weekend, we had our alumni back and they were all just blown away by the NFL wall in the back and the All-American wall,” Gallagher said. “We have a couple athletes that have been on that (All-American wall), and now with the new wraps, we have been able to put that on our newsletters to recruits and even send that out to our alumni. I definitely think it’s positive on so many different levels, with recruiting and also with keeping those relationships with alumni. In a sense, it’s giving back to them and showing them that the athletic department recognizes what they did for their programs. It’s something for my athletes now, I mean recruits see that they could be that one day. … So I think it’s really been a positive thing, a change and much needed.”

“All in all, the Memorial Field House got upgraded by 200 percent,” Ruefle said. “I think (Garzarelli’s) still making a lot of changes to it, which is phenomenal. I can even attest that coaches think it’s much better. From coaches to the athletes, everyone loves it. I’m always seeing people going to the fueling station to get snacks and they’re always raving about how nice of a benefit that is. Even alumni, I’ve had alumni who’ve seen all the changes, and they have almost a bit of jealousy that Todd wasn’t around whenever they were going to IUP.”

Bears 2020 vision: More must be done to maximize Mack