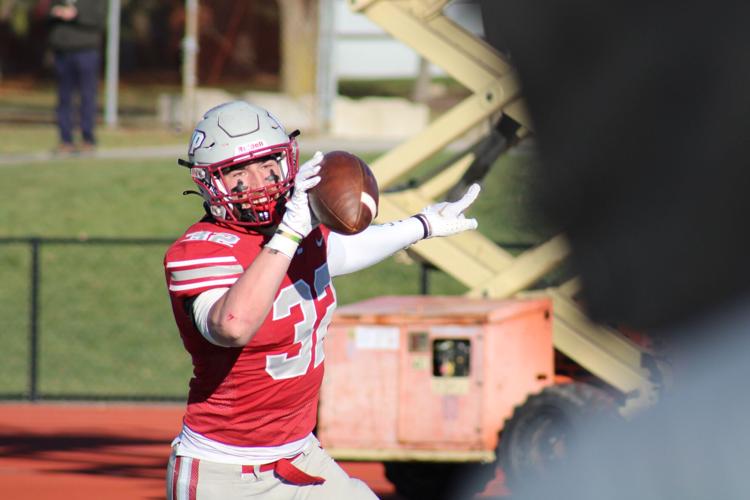 IUP linebacker Connor Kelly celebrated after returning a blocked punt 25 yards for a touchdown during the third quarter of Saturday's 19-13 win over Ashland at Miller Stadium. His special teams touchdown gave IUP a 19-7 lead, one the Crimson Hawks wouldn't relinquish. 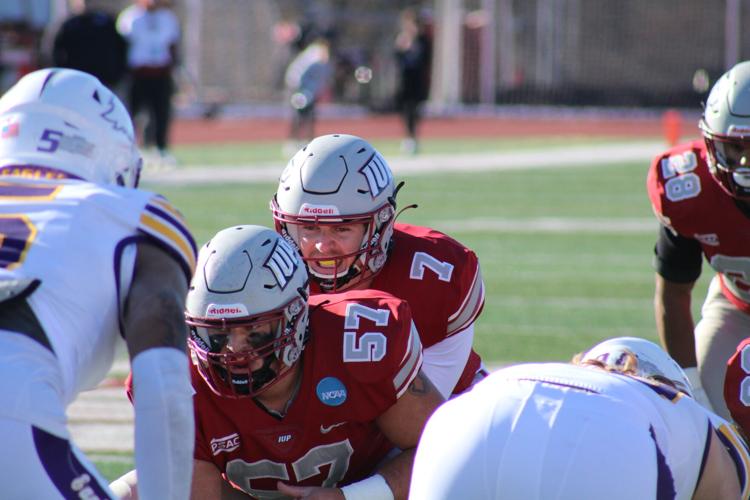 IUP linebacker Connor Kelly celebrated after returning a blocked punt 25 yards for a touchdown during the third quarter of Saturday's 19-13 win over Ashland at Miller Stadium. His special teams touchdown gave IUP a 19-7 lead, one the Crimson Hawks wouldn't relinquish.

“I’m proud of our team,” said IUP coach Paul Tortorella. “We've got a great bunch of players that really understand what this is all about.”

And what this is all about is being one of the last eight teams standing in the country. The NCAA Division II playoff field is made up of 28 teams, with seven in each of the four Super Regions. After this weekend's games, only two teams in each region remain alive in the chase for a national championship.

After defeating Shepherd in the PSAC Championship game on Nov. 12, the Crimson Hawks (10-1) earned the No. 1 seed and a bye in Super Region One. The Eagles (10-2) defeated Notre Dame College (Ohio) 20-13 on Nov. 19, and the two were on a collision course to decide who would play for the regional championship.

The win was IUP's first in the NCAA playoffs since 2017, when the Crimson Hawks reached the national semifinals.

Shepherd beat Slippery Rock, 37-27, in the other semifinal Saturday, setting up a rematch with IUP next weekend.

IUP wasted no time getting started offensively in this one, scoring touchdowns on their first two drives, with all but one of the Crimson Hawks’ first 17 plays resulting in positive yardage.

After forcing Ashland to a three-and-out on their first possession, the Hawks took over at their own 40-yard line. IUP marched 60 yards on eight plays including passing plays of 20 yards, 10 yards and culminating in a 6-yard touchdown pass from Mak Sexton to Hilton Ridley (redshirt sophomore, sports administration) in the right corner of the end zone less than five minutes into the game.

The leaping grab by Ridley was his eighth touchdown of the season, and after Nick Andrasi’s extra-point attempt was blocked, the Hawks were out to an early 6-0 lead.

The Eagles responded on the following series. Ashland started on its own 25-yard line and after 10 plays, faced a third-and-13 from IUP’s 38. Quarterback Austin Brenner rolled right, out of the pocket and on the run, fired the ball 35 yards to the right sideline where Garret Turnbaugh made a contested catch over an IUP defensive back for the score.

After making their extra point, the Eagles took the lead from IUP 7-6, and the Hawks trailed for the first time since Oct. 29, when they suffered their only loss of the season at Gannon.

IUP came right back on its next drive, once again moving the ball efficiently and after nine plays and 74 yards, Duane Brown (redshirt senior, sports administration) caught a 1-yard touchdown pass in the left corner on the endzone on the first play of the second quarter. IUP regained the lead with 14:55 left in the half, but the lead only stood at 12-7 after a second failed extra-point attempt of the half.

“(We have) two skilled receivers,” said Tortorella. “(We’ve) got Ridley with great size, and Duane can really jump and has great ball skills.”

“On the first two drives, it was a good mix of run and pass (plays),” said Adam Houser (redshirt sophomore, finance), who ran for 125 yards on 33 attempts. “We were really just moving the ball quickly.”

After scoring on its first two possessions, IUP’s offense slowly began to fizzle out after that even though the Crimson Hawks had chances to extend their lead.

Less than a minute after Brown’s touchdown, Drew DiNunzio-Biss (redshirt sophomore, safety science) intercepted a pass at 14:04 of the second quarter, giving the Hawks possession at the Ashland 43-yard line with a chance to put some distance between them and the Eagles.

IUP marched to the Ashland 17, but the promising drive ended when Sexton was intercepted at the Ashland 7-yard line, giving the Eagles the ball back.

But IUP’s defense held firm and forced Ashland to punt less than two minutes later. Sexton and the Hawks offense got the ball back at their own 36 with 9:27 to play in the second quarter and once again had a chance to add to their lead.

But just two plays later, Sexton was picked off again, his second in as many pass attempts. It was an uncharacteristic turn of events for IUP’s quarterback, and Ashland seemed to have snatched momentum.

“Our offense was kind of hot and cold,” said Tortorella. “We had two turnovers which is a little bit unlike us.”

When the Hawks’ offense stalled, the defense held strong, particularly against the run and kept IUP ahead for most of the game.

“That was our main focus, stopping the run,” said linebacker Connor Kelly (graduate student, marketing). “The focus was to load the box and make them one-dimensional.”

The Eagles, who had averaged 203 yards on the ground per game and 4.8 yards per attempt, were held to a season-low 106 by IUP. The Eagles’ leading rusher, Larry Martin (98.8 yards per game) was held to a mere 36 yards.

On Ashland’s opening drive of the second half, the Eagles moved from their own 30 down to the Hawks’ 11-line. After a couple of rushes and a 5-yard pass play, Ashland was knocking on the door. From the 2-yard line, the Eagles faced a fourth-and-goal. Martin got the handoff before being met by Jay Holmes (redshirt junior, criminology) at the line of scrimmage for a momentous stop for IUP’s defense.

“Holmes is a guy that has come on the second half of the season,” said Tortorella. “He’s got a lot of talent, just doesn’t have much experience.”

With the clutch goal-line stand and the Hawks clinging to a 12-7 lead midway through the third quarter, it was still anybody’s game.

IUP punted on its next possession, then forced a three-and-out on the visitors’ ensuing drive. On a fourth-and-5 from their own 30, Ashland was ready to punt. The game changed when Raunya Mitchell (redshirt senior, criminology) broke through the Eagles’ line, blocked the punt and Kelly scooped the ball up at the 25-yard line and returned it for the touchdown.

“Score,” said Kelly when asked about what he was thinking when he picked up the ball. “Raunya made a hell of a play. I just had to do the rest, scoop and score, don’t get tackled.”

IUP now led 19-7 and had a solid, two-score lead that the Hawks had been looking for.

“The difference in the game was probably that blocked punt.”

After the teams traded punts, Ashland had the ball with 10:34 remaining in the fourth quarter at its own 13-yard line. The Eagles moved efficiently down the field, never facing a third down, and reeled off an eight-play, 87-yard scoring drive. The Eagles’ Gei'vonni Washington punched it in on a 9-yard rush, shortening IUP’s lead to 19-13 with 8:05 left in the game.

The Crimson Hawks offense took over with exactly eight minutes left to play and took 7:23 off the clock even though they didn’t score. It was an almost perfect drive from IUP to close out the game, converting three third downs in the process, but the Crimson Hawks gave the ball back to Ashland after a failed fourth-down conversion at the Ashland 26 with just 37 seconds left.

“In the huddle we were just reminding ourselves that getting first downs were going to win the game,” said Houser. “Huge credit to our offensive lineman, they were incredibly physical. When we want to run the ball, we can do it because we have the guy’s up front that allow us to do that.”

The Eagles would only advance as far as their own 37-yard line before they ran out of time, and the Crimson Hawks were victorious.

IUP held the ball for 37:58 of the game and converted 6 of 13 third downs. Keeping Ashland’s offense off the field was key to the win.

“Time of possession was huge, we had the ball for almost 38 minutes,” said Tortorella. “And it came down to converting third down and fourth downs. We were 7-for-16, they were 4-for-15.”

The Crimson Hawks’ ability to come up with big plays was crucial to the win and IUP will move on to the regional championship.

The championship will be played on Saturday at George P. Miller Stadium where the Hawks will once again face off against Shepherd (12-1, 7-1).

IUP defeated the Rams on Nov. 12 for the PSAC title, and while the Hawks aren’t surprised to be facing Shepherd again, it will take another hard-fought performance if they want to advance to the national semifinals.

“It will be a big task for us to beat them again,” said Tortorella. “We kind of thought, if they held court and we held court, we’d see them again. We just have to advance.”