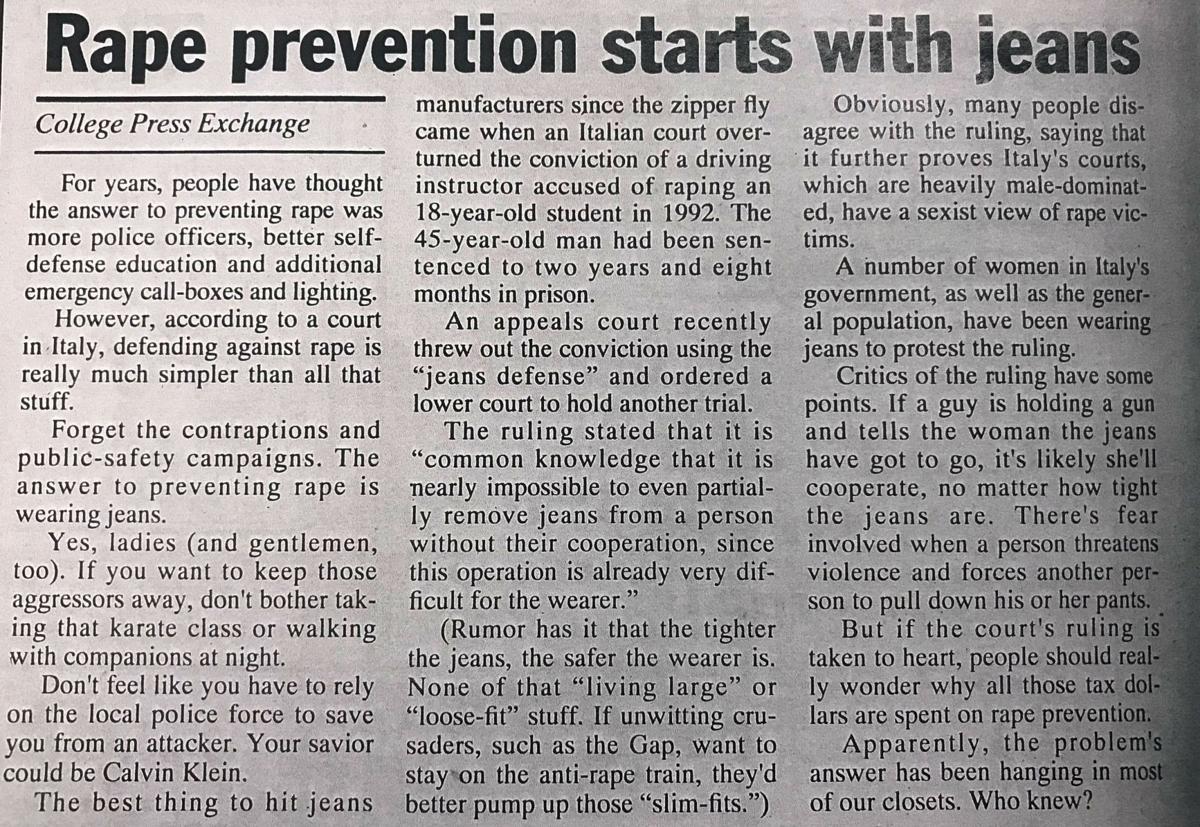 This article appeared on the opinion page of The Penn on April 30,1999.

The above article appeared on the opinion page of The Penn on Feb. 12,1999.

This article appeared on the opinion page of The Penn on April 30,1999.

The above article appeared on the opinion page of The Penn on Feb. 12,1999.

A mini skirt. A T-shirt. A pair of pajamas. Sweatpants. Jeans.

These are the kinds of clothes rape victims wear. Because rapists don’t discriminate between people who are dressed “provocatively” and those who are “just dressed.”

Although people are far more aware of the pervasiveness of sexual assault and power dynamics in Hollywood and around the world, the myth that clothing can be used as justification for sexual violence is as prevalent as ever.

In April 1999, during sexual assault awareness month, The Penn ran an editorial on its opinion page titled “Rape prevention starts with jeans.”

While it would be nice to think this article were from 1899 instead, the sad reality is that just about 20 years ago, it was still a widely held belief that a victim wouldn’t have been raped in different clothes.

What’s worse than thinking about how recent this problematic “knowledge” was spread is realizing that this is still a persistent problem today.

A victim, by definition, is someone who is harmed, injured or killed as a result of a crime, accident or other event or action outside his or her control.

The very concept of a victim is that this person is not at fault for what happened.

So is a newspaper publishing articles claiming that rape can be prevented if a victim changes his or her wardrobe?

Because this is still a clear issue, and because The Penn has – in the past – perpetuated these falsehoods, it is only right that during this year’s sexual assault awareness month, this topic is revisited so people may be enlightened about what is fact and what is fiction.

Every day, rape victims who confide in friends, family or even lawyers are asked four words that perpetuate the notion that they are at fault for what happened to them:

“What were you wearing?”

This not only detracts from the feelings or details of the victim’s experience, but it also forces victims to ask themselves, “Is this my fault?”

If it were socially acceptable to wear anything, what would you wear? Shorter shorts when it’s hot out? Yoga pants to be more productive at work? No bras because it’s more comfortable that way? Crocs?

No matter how you answered that question, the overall issue of it is that what’s “socially acceptable” most often applies to what women would like or feel most comfortable wearing.

The concept that women should avoid dressing “like sluts” in order not to be victimized is nothing new.

Women begin to receive this message from a young age. Across the country, teens – and yes, even children – are sexualized for everything from their bare shoulders to their “too tight” pants.

School dress codes are enforced not to protect the students wearing certain clothes nor to encourage them to be comfortable or express their indivuality – instead, these students are given dress codes that are most often meant to “divert male attention” because the most distracting thing to a middle school boy is his classmate’s bra strap.

Meanwhile, the most distracting thing to a middle school girl is being removed from class, suspended from school or otherwise missing out on her education because she is impeding the learning of others.

Harriet Dale, a 15-year-old at Stoke-on Trent’s Trentham High School, was sent home for wearing a pair of “too-tight trousers,” according to a Sept. 10, 2015, article from Refinery29.

A cited Yahoo U.K. report in the article revealed that the school’s headmistress didn’t blame it on hormonal teen males. Instead, she argued that the pants would distract male teachers.

The idea that children are responsible for detering the gaze of creepy men needs to stop.

The notion that adult males will be attracted to children – because that’s what anyone under the age of 18 is – is so much more problematic than these students’ dress codes.

Clothing is apparently a big deal in this world of sexual harassment and assault. But it shouldn’t be.

Focusing so much on a person’s dress is not only taking away from his or her experiences, but it also continues the idea that victims are at fault for their circumstances.

Sexual assault is the only case in which “an unfightable urge” is a defense.

When a person is robbed at gunpoint, we don’t blame the victim for being shootable.

When someone walking across the street is hit by a car, we don’t blame the victim for walking.

So why is it OK in the case of sexual assault to define a victim by circumstances that are ordinary and not at all a causation?

By rationalizing that victims are somehow deserving of their circumstances, we are telling the perpatrators and rapists that they aren’t at a fault for the crimes they have committed.

In the same vein, if we can point to “controllable, outside factors” – such as a skirt – as the reason for her assault, it makes us feel safer and more comfortable because we don’t have to address the real issue – rapists.

Women’s wardrobes have long been used as an excuse for sex crimes; however, when you look at the data on why people rape, that doesn’t hold up.

Rapists will claim clothing as the reason for their crimes, but victims are never wearing the same exact style of clothing. Outfits can rage from “revealing” to snowsuits.

These are simply arguments meant to transfer the responsibility of control and power from the perpetrator to the victim.

When it comes to sex crimes, clothing just doesn’t matter. And, not only does this misconception contribute to the belief that a victim is at fault for his or her sexual assault, but it also removes a feeling of safety for victims to come forward about what has happened to them for fear of being judged, blamed and even persecuted for what has happened to them.

With that shame, fewer victims report sexual assaults and suffer alone, which leads to fewer rapists being brought to justice and more instances of rapists repeating their crimes to either the same victims or new ones.

All this blaming and questioning of victims simply feeds rape culture, a sociological concept used to describe a setting in which rape is normalized due to attitudes about gender and sexuality.

There’s no set of qualifiers for categorizing an act as a sexual assault other than lack of consent.

We, as a responsible and educated public, owe it to ourselves and our communities to refuse to condone conversations where a victim is scrutinized.

Victims do not need to explain what they were wearing or drinking or saying or doing to garner your sympathy or approval of this being classified as a crime. It is a crime. Period.

In a crime, there is a perpetrator and a victim.

Of course, it’s no wonder this culture exists when we have a president who not only bragged about sexually assaulting women, but who also denied that he could have sexually assaulted a journalist because she was “unattractive” to him.

With these statements – and others – Donald Trump told the world that he believes sexual assault is linked to a person’s physical appearance: another victim-blaming tactic.

Unfortunately, victim-blaming is so pervasive and subtle – especially with the rheotoric supoprted by those in charge, such as our president – that people may not even realize they’re doing it.

When someone reports an assault, particularly one of a sexual nature, even people closest to the victim can’t help but ask for details like “What were you wearing?” and “Were you drinking?”

While these questions may be asked out of concern, they also contribute to a toxic narrative of shifting the blame from the perpetrators to the victim.

Before there was the Rape Shield Law – which effectively aims to keep victims of rape from having their previous sexual history be presented as evidence against them during a trial – judges could also use past sexual experience to put a woman’s assault experience on trial. Even today, there can still be this notion of “you asked for it.”

Sexual assault is an act of control and power and has nothing to do with a person’s clothing or past.

While there has certainly been progress, we still live in a culture that, at times, enforces victim blaming on sexual assault survivors.

Society needs to recognize that the only question to ask a victim of sexual assault is “What can I do to help?” Asking a victim what he or she wore when they were attacked is irrelevant, damaging and ignorant.

Removing blame and shame from the dialogue will empower victims to report their attacks and begin their recovery, without shame or fear.

Ironically, The Penn also published the article titled “Clothing is not a defense for rape” earlier in 1999, proving that it is possible to spread informative rheotoric about a situation while also lacking a certain understanding to maintain this position consistently and knowledgeably.

It is our job – not only as a newspaper but also as citizens – to consistently provide accurate and truthful information.

We are only able to understand what we have learned, but we are responsible to apologize for our own misgivings and correct them.