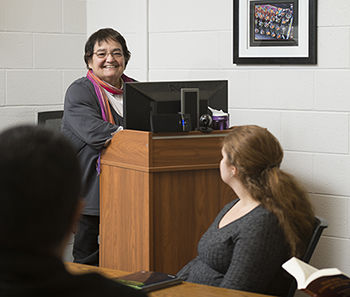 Mary Beth Leidman made her mark in the world of education as well as on major media markets. She hosted radio shows that received as many as 20,000 listeners and television programs for local stations in major cities. 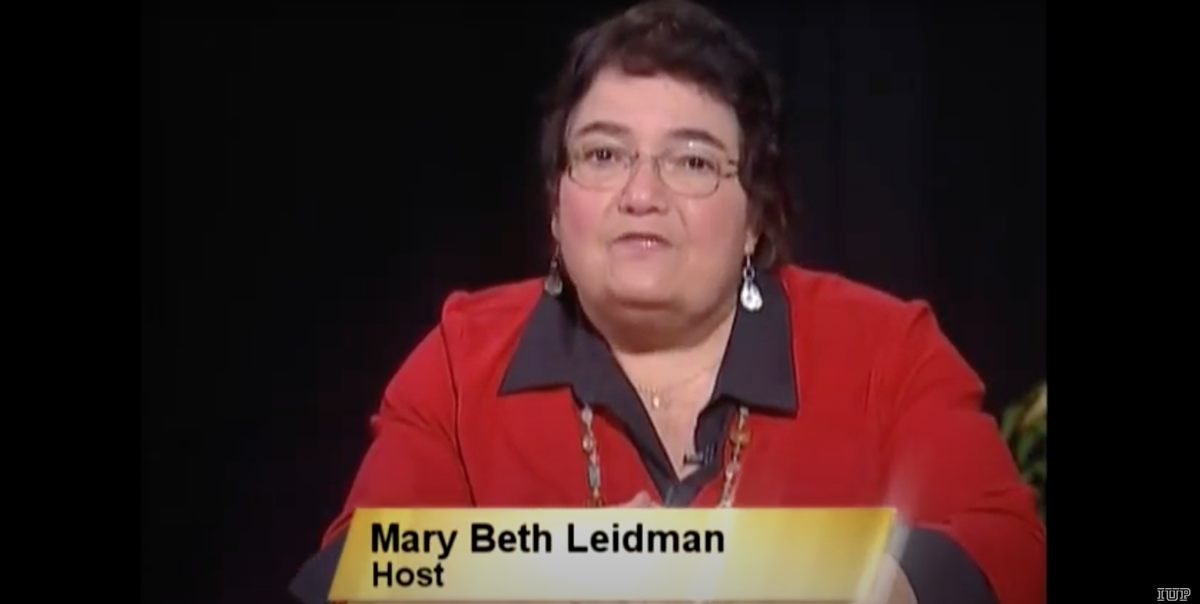 Leidman hosted “IUP Talks,” a public access television program aired exclusively on IUP-TV. The show featured IUP faculty and staff members and their stories about events that impacted their lives. She was the show’s host for more than 25 years.

Mary Beth Leidman made her mark in the world of education as well as on major media markets. She hosted radio shows that received as many as 20,000 listeners and television programs for local stations in major cities.

Leidman hosted “IUP Talks,” a public access television program aired exclusively on IUP-TV. The show featured IUP faculty and staff members and their stories about events that impacted their lives. She was the show’s host for more than 25 years.

“It was a beautiful, crisp blue-skied day when I came to interview. Who knew that was an exception to the weather here?”

Those are the words from IUP communications media professor Mary Beth Leidman referring to Indiana, a place where she’s held great experiences and memories. Leidman will retire from this school after 38 years.

Throughout her entire career, Leidman had success in primarily radio and television.

Leidman got her bachelor’s and master’s degree in theater and music and was a communications and speech minor. She found the path to success when she went to Emerson College to study music and theatre, but also debuted on her first radio station WERS-FM and first TV experience on WBZ in Boston.

“I almost failed out of high school and then went to a local community college called Montgomery College in Maryland,” Leidman said. “It was then when I started in all type of communications.

“I went to Emerson College, and back then, there were only two or three major focuses, which were theater and radio. I actually got my degree in theater and music.”

From an early age, she was always fascinated by radio and television.

“My mother always used to say that television would ruin my life,” Leidman said. “I like to stay that I kind of got even by eventually making media my career.

“Actually, she was very supportive of my creative side, and I am forever grateful for that. I hope that I’ve passed that on.”

In Leidman’s early career, she was an artistic director for a theater company in Maryland. Then she got her first-class General Radiotelephone Operator License (GROL) by the Federal Communications Commission (FCC) to operate radio equipment.

It was during this time that she began a side venture being a theatre and then media critic. She first started as a theatre critic in Washington, D.C.

“D.C. is my home,” she said. “I love the diversity and experiences I’ve had there.”

Leidman credits luck, timing and skill set with helping to have a successful and fulfilling career.

“I have been lucky with being in the right place in the right time to get jobs,” she said. “It was all timing and having the right skill set.”

Shortly after being a critic for a local newspaper in D.C., Leidman got a job at IUP after having spent years in television at WXEX and WCVE-TV in Richmond, Virginia. The Indiana Gazette also hired her to be a critic for the newspaper, and she worked there for 12 years.

“I had a regular column at the Gazette,” she said. “I also was the reviewer for a couple of the Maryland and D.C. area radio stations.”

Leidman credits being a theatre critic to having media be a huge part of her interest and experience.

She never was in the movie scene but did a lot in television and radio. Leidman went out of her comfort zone when she was able to create a book with Hollywood director Steve Binder. Together, they created “Fade Up-26: The Movers and Shakers of Variety Television,” which was an exploration of television and its impact on the genre.

“The book literally dropped into my lap to do a fellowship in Hollywood,” she said. “I don’t exactly know how this happened, but I said the right thing to the right person, and he sent an email saying, ‘Hi, do you want to write a book with me,’ and the rest was history.”

She got to interview 26 of Hollywood’s biggest television directors.

“It was an amazing part of my life,” she said. “What an opportunity. Again, I was in just the right place at the right time, and I was saying the right thing to the right person.”

Throughout her career, Leidman has produced various television programs, including IUP Talks for more than 25 years, having the catchy sign-off phrase “Here’s to wisdom in your future and a happy tomorrow.” She also had radio programs on WGAY-FM and WGMS in Washington and at WCCS locally while at IUP.

She’s worked on a children’s television show for eight years, and over the span of her career, she’s interviewed more than 500 people on radio, and more than 150 people on television.

She became a professor because it was close to D.C. and she could teach radio and television. She said she feels lucky to have been chosen.

“Teaching at IUP gave me a chance to take all the technical skills in radio and television to put it back on the air,” Leidman said, “and gave me the chance to formally leave theater.”

Leidman is grateful for the opportunities, experiences and memories she’s gotten at IUP, especially thankful to her dean and colleagues, especially communications chair Dr. B. Gail Wilson. She also mentioned that one of her former students, Dr. James Lenze has become a valued colleague in the department.

“The entire communications media department is terrific, and I owe all of them a huge debt of gratitude,” she said.

In addition to being active in her department, Leidman also served on the university-wide tenure, sabbatical and promotion committees, and for 26 years she served as a state delegate and longtime committee chairperson for the Association of Pennsylvania State College and University Faculties (APSCUF).

“It’s all about being a solid university citizen,” Leidman said. “I’ve had tremendous luck with recognition at IUP. One of my goals in life was that if I was going to be a professor, I wanted to be competitive with the outside world.

“I was always sending my media and writing to be judged. I won the A.I.R. (Achievements in Radio) Awards in Pittsburgh, and a documentary I sent out was recognized for a national film festival, to name a few; it’s been great.”

She said IUP has been good to her and a great place to have a career, winning the Creative Arts award twice at IUP.

“IUP was a really good place to be a part of in terms of support, optimism and opportunity,” Leidman said. “Students being able to feel at the end of the day that possibly I was able to make a contribution to their successes and college careers is something I’ll always remember.

Leidman said she will miss her students and being able to be a part of their academic journeys.

“I like to see IUP students who are successful, especially those who go onto big things after college,” she said. “One of the interns in the communications media department was trying to intern at Columbia Records.

“She was up against other interns from major schools like NYU, Syracuse and Penn, but she was the best and outshone the other students,” Leidman said. “This was not an unusual situation to see because students from IUP in the communications media department are competitive and successful.”

She will miss her “home” and family at IUP.

“I am certainly going to miss my colleagues and the opportunity that IUP has personally given me to be able to address all the different parts of who I am; the creative, academic and connected parts of who I am.”

Leidman, her colleagues, students and family know that retirement doesn’t mean doing nothing.

“Anyone who knows me knows that it’s an absurdity that I’m not going to work,” she said. “I’m scheduled to teach a course at Webster Vienna University in Austria. And I was supposed to go to Australia next week and speak there, but COVID-19 had stopped that plan in its tracks.”

Leidman believes media is a powerful tool that brings people together.

“One time I had a show in D.C. that got ratings that showed that 20,000 people were listening on average,” she said. “To have that kind of input, even for a short period of time shows how important media is for bringing people together and ideas with print, radio and television media.

“I’m very happy to be a part of that universe, even in the smallest way. I hope that the future in terms of my students and everyone else keeps to the forefront the idea that media can make the world better. Having had a piece of that was very special, even if it was small.”