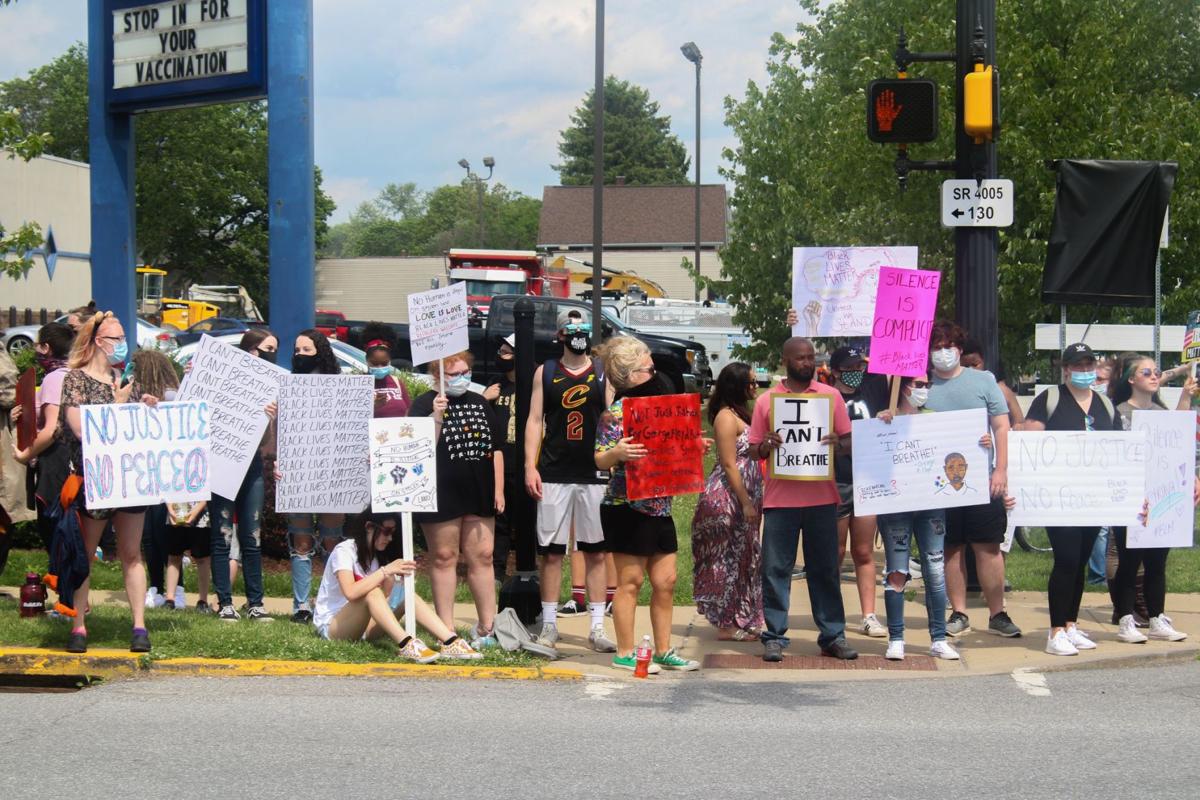 By The Penn’s estimates, around 150 demonstrators, mostly teenagers and young adults, took part in a peaceful Black Lives Matter march in downtown Indiana on June 3. After the march, a small group of 20-30 demonstrators (pictured above) returned to the starting point at Fourth and Philadelphia Streets and continued to protest peacefully into the evening hours. 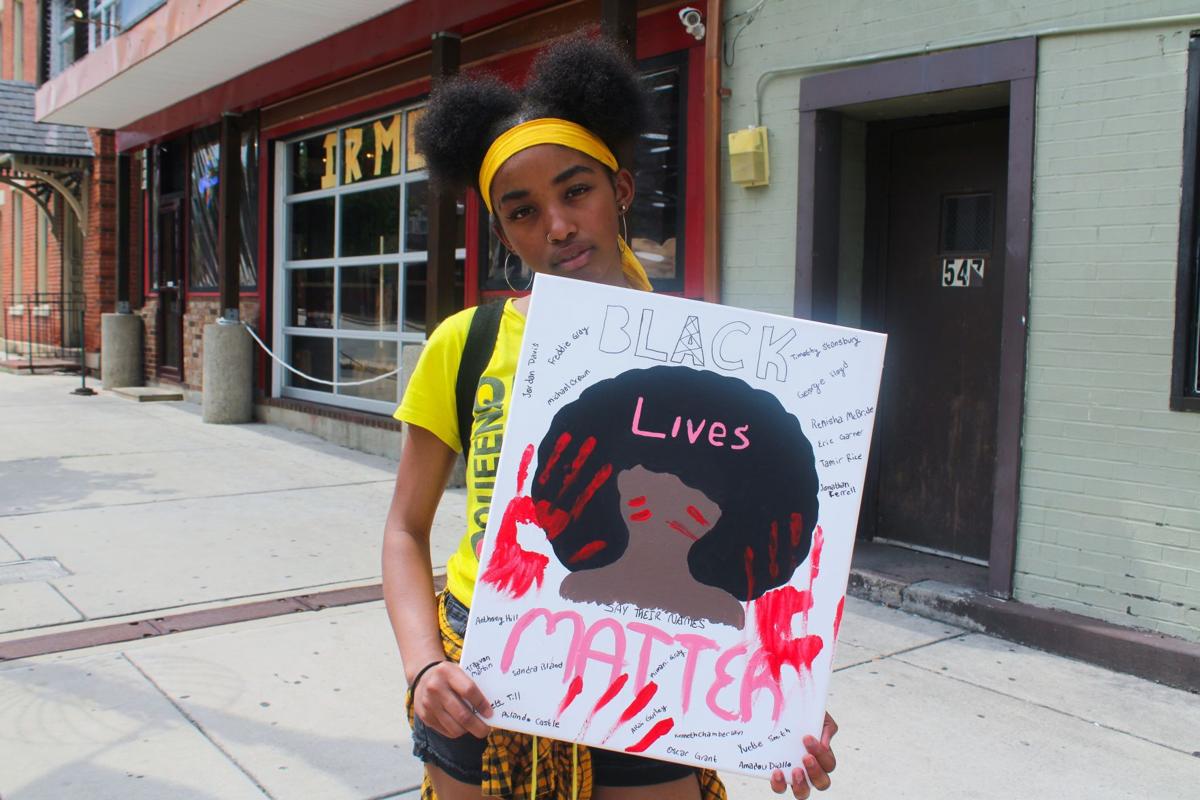 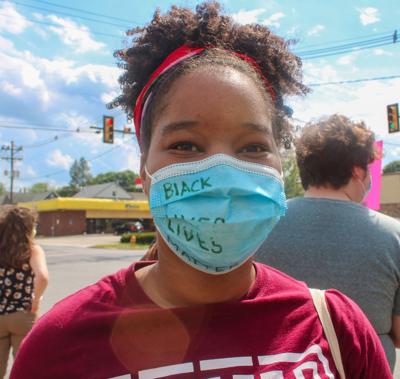 By The Penn’s estimates, around 150 demonstrators, mostly teenagers and young adults, took part in a peaceful Black Lives Matter march in downtown Indiana on June 3. After the march, a small group of 20-30 demonstrators (pictured above) returned to the starting point at Fourth and Philadelphia Streets and continued to protest peacefully into the evening hours.

Organized by a pair of Indiana County teenagers, a Black Lives Matter protest took place in downtown Indiana on Wednesday, June 3, during which demonstrators peacefully marched down the Philadelphia Street sidewalks side-by-side with the borough’s police chief.

The march was part of the greater, nationwide Black Lives Matter movement that has been reignited since the death of George Floyd while in Minneapolis police custody on May 25. In the days since the Indiana protest, 27-year-old Rayshard Brooks was killed by Atlanta police on June 12, becoming the latest victim on the long list of unarmed black Americans killed by police, further fueling the cause.

One of the organizers, 15-year-old Amara Moore, said the idea behind the march was to raise awareness in the Indiana community of the longstanding racial inequalities black Americans experience.

“It wasn’t just for George Floyd or the racist cops,” said Moore, a ninth-grader to be at Indiana High in the fall. “It was for equality for all black and colored people because there’s more than just racist cops. There’s racist people everywhere, in school districts, in businesses, so we just need to get the word out. Black lives do matter, and colored lives matter.”

Moore and friend Rebecca Niel imagined the idea of a protest somewhat on a whim two days earlier. The power of social media took care of getting the word out.

“My friend, Becca Niel, she’s in seventh grade going to eighth, she was like, ‘Hey, so we should have a march since they’re not having one,’” Moore said. “And I was like, ‘That’s a good idea.’ And then me and her started just putting stuff together. She made a flier (for Instagram) … and we just started posting it on everything. A ton of people just spread it around ... and then everyone just kind of showed up.”

Cybil E. Moore, Amara’s mother and an IUP alumna, was encouraged and saddened at the same time by her daughter’s and Niel’s idea of the march.

“I’m proud of her, but the fact that it’s 2020 and my daughter felt the need to do this at the age of 15 lets me know that as much as we’ve put into the work of peace, of equity, there’s still so much more to go, and that the struggle continues,” she said, holding back tears.

Notably, the PNC Bank branch in the 600 block of Philadelphia Street had its ATM removed and boarded up its windows prior to the march, the only business along the march route to do so.

The demonstrators, most of them appearing to be teenagers and young adults, began their march at 2 p.m. At the conclusion, they gathered in unity at the steps to the courthouse for about 30 minutes before dispersing without conflict around 3 p.m.

During the march, traffic on Philadelphia Street proceeded as normal, although officers of the Indiana Borough Police Department directed traffic at the intersections to allow the demonstrators to safely cross.

In an act of solidarity and support, Chief of Police Justin Schawl was seen walking alongside the demonstrators between Sixth and Seventh Streets. There was a police presence at the courthouse, though no show of force was exhibited by the Indiana authorities.

Afterwards, a small group of 20-30 demonstrators returned to the starting point of the march on the corner of North Fourth and Philadelphia and gathered peacefully into the evening.

It’s unclear how many IUP students took part in the protest, but The Penn spoke with one current student and one recent graduate who were part of the group that remained at North Fourth and Philadelphia late into the afternoon.

Gabby Shick (junior, psychology), a native of Pittsburgh who lives in Indiana year-round, said she felt compelled to join the protest.

“Obviously, it’s a huge problem in America right now, racism is a huge problem,” she said. “This is the right side of history to be on. Black lives matter. Not all lives matter until black lives do, too. It’s just important to me. It’s something I really believe in. I walked here alone to be a part of this.”

So did Tea Capps, who graduated in May with a degree in English. A native of Waynesboro in eastern Pennsylvania, Capps remains in Indiana until her lease is up and works at the Rite Aid where the march began.

“When we found out about this whole protest happening, all my co-workers … they were genuinely terrified,” Capps said, “and they made us take out the cigarettes and hide them and we had to lock all the (cash) drawers and hide them. And it was just that fear of something that’s supposed to be a peaceful thing that really didn’t sit right with me. I just didn’t like it.

“So the idea of people protesting a black man being shot, is like why is that terrifying to people?” Capps continued. “And I didn’t like customers coming up to me at the register asking me why we’re not putting a stop to this, how are we going to let them do that. Like, this isn’t right, you guys are going to just be OK with it, and it was all that display of fear and for some reason, anger, that made me want to come out and support it.”

At its core, the Black Lives Matter movement seeks racial equality for all black citizens and has continued to regain momentum in the three weeks since Floyd’s death. According to the latest estimates by USA Today, updated June 18, rallies and protests have taken place “in at least 1,700 places so far, large and small, across all 50 states.”

Because of the efforts of Moore and Niel, Indiana is also on that list.

“There’s people supporting, and I think it’s good,” Shick said. “No matter how many people are here, it’s a good turnout. People are here.”